The origins of modern viruses are not entirely clear. It may be that no single mechanism can account for all viruses. They do not fossilize well, so molecular techniques have been the most useful means of hypothesising how they arose. Research in microfossil identification and molecular biology may yet discern fossil evidence dating to the Archean or Proterozoic eons. Two main hypotheses currently exist.[8]

Small viruses with only a few genes may be runaway stretches of nucleic acid originating from the genome of a living organism. Their genetic material could have been derived from transferable genetic elements such as plasmids or transposons, which are prone to moving within, leaving, and entering genomes.

Viruses with larger genomes, such as poxviruses, may have once been small cells which parasitised larger host cells. Over time, genes not required by their parasitic lifestyle would have been lost in a streamlining process known as retrograde-evolution or reverse-evolution. The bacteria Rickettsia and Chlamydia are living cells that, like viruses, can only reproduce inside host cells. They lend credence to the streamlining hypothesis, as their parasitic lifestyle is likely to have caused the loss of genes that enabled them to survive outside a host cell.

It is hypothetically possible that viruses represent a primitive form of self replicating DNA and are a precursor to life as it is presently defined.

Other infectious particles which are even simpler in structure than viruses include viroids, satellites, and prions.
Автор: Lim на 10:06 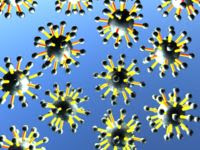 Viral diseases such as rabies, yellow fever and smallpox have affected humans for many centuries. There is hieroglyphical evidence of polio in the ancient Egyptian empire, however, the cause of these diseases was unknown at the time. In 1717, Mary Montagu, the wife of an English ambassador to the Ottoman Empire, observed local women inoculating their children against smallpox. In the late 18th century, Edward Jenner observed and studied Miss Sarah Nelmes, a milkmaid who had previously caught cowpox and was subsequently found to be immune to smallpox, a similar, but devastating virus. Jenner developed the first vaccine based on these findings; after lengthy (but successful) vaccination campaigns the World Health Organization (WHO) certified the eradication of smallpox in 1979.

In the late 19th century Charles Chamberland developed a porcelain filter with pores small enough to filter viruses, yet retain all viable bacteria. Dimitri Ivanovski used this filter to study tobacco mosaic virus. He published experiments showing that crushed leaf extracts of infected tobacco plants were still infectious after filtering through such filters. At about the same time, several others documented filterable disease-causing agents, with several independent experiments showing that viruses were different from bacteria, yet they could also cause disease in living organisms. These experiments showed that viruses are orders of magnitudes smaller than bacteria. The term virus was coined by the Dutch microbiologist Martinus Beijerinck.

In the early 20th century, Frederick Twort discovered that bacteria could be attacked by viruses. Felix d'Herelle, working independently, showed that a preparation of viruses caused areas of cellular death on thin cell cultures spread on agar. Counting the dead areas allowed him to estimate the original number of viruses in the suspension. The invention of Electron microscopy provided the first look at viruses. In 1935 Wendell Stanley crystallised the tobacco mosaic virus and found it to be mostly protein. A short time later the virus was separated into protein and nucleic acid parts. In 1939, Max Delbrück and E.L. Ellis demonstrated that, in contrast to cellular organisms, bacteriophage reproduce in "one step", rather than exponentially.

A major problem for early virologists was the inability to propagate viruses on sterile culture media, as is done with cellular microorganisms. This limitation required medical virologists to infect living animals with infectious material, which is dangerous. The first breakthrough came in 1931, when Ernest William Goodpasture demonstrated the growth of influenza and several other viruses in fertile chicken eggs. However, many viruses would not grow in chicken eggs, and a more flexible technique was needed for propagation of viruses. The solution came in 1949 when John Franklin Enders, Thomas H. Weller and Frederick Chapman Robbins together developed a technique to grow polio virus in cultures of living animal cells. Their methods have since been extended and applied to the growth of many viruses and other infectious agents that do not grow on sterile culture media.
Автор: Lim на 10:04

A virus (from the Latin noun virus, meaning toxin or poison) is a sub-microscopic particle (ranging in size from 20–300 nm) that can infect the cells of a biological organism. Viruses can replicate themselves only by infecting a host cell. They therefore cannot reproduce on their own. At the most basic level, viruses consist of genetic material contained within a protective protein coat called a capsid. They infect a wide variety of organisms: both eukaryotes (animals, plants, protists, and fungi) and prokaryotes (bacteria and archaea). A virus that infects bacteria is known as a bacteriophage, often shortened to phage. The study of viruses is known as virology and people who study viruses are known as virologists. Viruses cause several serious human diseases, such as AIDS, influenza and rabies. Therapy is difficult for viral diseases as antibiotics have no effect on viruses and few antiviral drugs are known. The best way to prevent viral diseases is with a vaccine, which produces immunity.

It has been argued extensively whether viruses are living organisms. Most virologists consider them non-living, as they do not meet all the criteria of the generally accepted definition of life. For example, unlike living organisms as defined, viruses do not respond to changes in the environment.
Автор: Lim на 10:03

In order to better understand the evolution of poliovirus vaccine strains, I've included a brief overview of the virus and its history...

Taxonomy
Poliovirus is a member of the family Picornaviridae, genus Enterovirus. (Picornaviridae also includes members of the Rhinovirus genus. Rhinoviruses target the upper respiratory system and are typically responsible for the common cold.) Poliovirus primarily infects the gastrointestinal tract, although in rare cases, it can migrate through the blood stream and infect brain and spinal cord neurons.

Structure and genome
Polioviruses are composed of a genome surrounded and protected by a proteinaceous capsid. The capsid, composed of 60 “protomer” subunits, is capable of self-assembly (imagine this process as a jigsaw puzzle putting itself together). The poliovirus genome is linear, single stranded RNA. The host cell mistakenly recognizes the viral genome as its own mRNA, and uses it to synthesize viral proteins.

History
Although poliovirus was isolated in the 1930s and was officially named in 1955, it has coexisted with humans for thousands of years. Clinical reports of poliovirus infections date back as far as 1400B.C. in Europe.

For centuries, poliovirus existed in the United States as an endemic infection, spreading among humans via the fecal-oral pathway. Most children contracted poliovirus early in life, rarely manifested any symptoms, and recovered with lifelong immunity. However, this mode of infection was disrupted when sanitation measures improved water quality in the 20th century. Consequently, the frequency of poliovirus infections in children plummeted, leaving a pool of susceptible individuals. If infected later in life, these adults were at a greater risk of developing the devastating, paralytic version of polio. In this ironic turn of events, improvements in public health actually contributed to an increase in the occurrence of paralytic poliomyelitis.

Jonas Salk introduced the first polio vaccine in 1955. Before that, quarantine was the only way to prevent poliovirus from spreading.


At 7:43 AM, Anonymous said...
What is the full scientific name for Poliovirus? Poliovirus?

Name:
Jennifer S. Griffin
I am a science writer and editor at a science consulting organization. I recently entered the working world after earning my Bachelor of Science in Cell Biology and Biochemistry from Bucknell and my Masters in Molecular Biology from Princeton. In addition to science writing, I'm also working on a second Masters in Environmental Engineering from the Worcester Polytechnic Institute (thanks to a grant from the National Science Foundation). This blog was mainly started to write about microbiology (virology in particular), but I also discuss careers in science beyond academia.
View my complete profile

Search the web for more science
Search my site

Previous Posts
Animalcules
Retroelement Classification
Endogenous Retroviruses: Are we a product of our ...
Coming VERY Soon!

Other Science Blogs
Blogs that link here
A Blog Around the Clock
Автор: Lim на 09:57